The fabulous YA author Jessica Khoury chatted with me about her first novel Origins, future projects and literary inspirations! 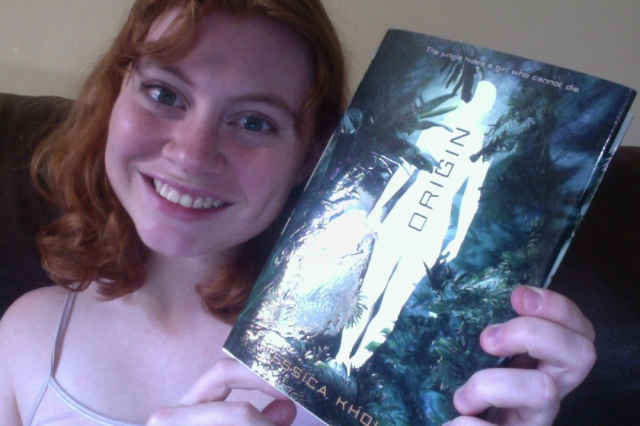 As a child, which book first introduced you to literature?

Danny and the Dinosaur, by Syd Hoff. I still love that book!

As an adult, what is your favourite book?

Such a hard question! I could never pick just one! Recently I’ve fallen in love with everything by Lois McMaster Bujold or Robin Hobb.

What inspired you to become a writer?

Danny and the Dinosaur by Syd Hoff, when I was four. It was the first book I’d ever read, and it was a totally magical moment. From that day forward, I never wanted anything more than to write stories of my own.

What are some of your favourite spooky reads?

I don’t read a lot of horror–I’m a chicken, yes I am! When I was a kid, Dr. Seuss books scared me. Weird, I know–but all those creatures he drew… some of them just gave me the creeps! Nowadays, I do like a little Stephen King now and then, my most recent read of his being The Gunslinger. Scary movie? Secret Window. Hey–that’s Stephen King too, isn’t it? And hey, does the Walking Dead count?

Your first novel, Origin is simply amazing. Can you tell us about it?

Origin was a bolt-of-lightning kind of story for me, in which I concieved the entire plot in about five minutes’ time. It began with the image of a girl trapped by glass walls and surrounded by jungle, separated from the boy she loved. I was so intrigued by her that I knew I had to start writing immediately.

I love steering clear of current trends and trying something new, so in a way, yes. But from the very moment the idea came to me, Origin was different–I never intentionally said to myself, “I want to make this stand out from the usual YA.” It just came with the story; one of the reasons I fell in love with Pia’s tale is that it felt so fresh and unique from the start.

Was there an inspiration behind the romance?

The romance in Origin has a bit of a Tarzan-and-Jane flair to it; I’ve always loved stories in which the guy and girl come from radically different worlds and yet still somehow find common ground between them. Though Pia and Eio grew up within a few miles of each other, their worlds are vastly different and each has so much to teach the other.

Are any of your characters inspired from real life?

Ami, Eio’s little foster sister, is definitely inspired by my own little sisters who are ages 7 and 9. They were in my thoughts as I wrote Ami’s scenes, when I was trying to think of what a little sister would say and do. And they are just as mischievous!

How do you craft your storyline?

I generally follow a vague outline; I have to know what each chapter will be about before I write it or I tend to sit and stare blankly at the page. But my outlines are always changing because its during the heat of writing that I usually discover where the story actually needs to go. It’s a balance between pantsing and planning.

At 22 you have published a hit YA novel. How does it feel?

I keep wondering when I will wake up! Of course, having been working toward this since I was four, it feels like it’s taken forever–so I am relishing every moment! It’s like a fairytale, truly.

If (most likely, when) your novel became a film, who would be your dream cast?

I really love Willa Holland, and she’s one of my favorite picks for Pia. Uncle Antonio looks just like Clive Owen in my head. I think my favorite character to cast, though, would be Harriet–there are so many actresses I could see in that role, but I especially love Nicole Kidman!

What author would you love to co-write with?

Herman Melville, definitely. He could write these awesome long books and then I’d come along and cut out all the boring parts and add a few kickbutt heroines; together we’d be unstoppable. 😉

Do you have any words of encouragement for any other aspiring young authors?

Read, write, read, and write–but don’t forget to live! The most important thing you will bring to you writing is your own life experience and personality–so cultivate these! Try new foods, visit new places, meet new people. Trust yourself, face and conquer your fears, and every once in a while, do something crazy. Live big to write deep.

What can readers expect from you in the future? Any current projects? Planned future projects?

Next up is a companion novel to Origin–not a sequel! But it is set in the same universe and you’ll see one minor character from Origin, though everything else will be different. New setting, new characters, new freaky science.

Be sure to check out Origins, available wherever books are sold.