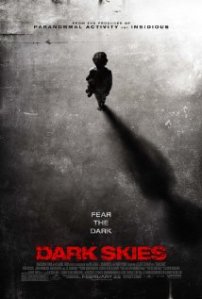 From the producer of Paranormal Activity, Insidious, and Sinister comes Dark Skies: a supernatural thriller that follows a young family living in the suburbs. As husband and wife Daniel and Lacey Barret witness an escalating series of disturbing events involving their family, their safe and peaceful home quickly unravels. When it becomes clear that the Barret family is being targeted by an unimaginably terrifying and deadly force, Daniel and Lacey take matters in their own hands to solve the mystery of what is after their family. Written and Directed by Scott Stewart (PRIEST, LEGION) Starring: Keri Russell, Josh Hamilton, Dakota Goyo, Kadan Rockett and J.K. Simmons (c) Weinstein.

Oh…my…GOODNESS! I love horror films, I watch as many as I possibly can. But, nothing terrifies me as much as aliens. Something about life on other planets just irks me beyond belief. The only other movie involving aliens that successfully terrified me was The Fourth Kind, and Dark Skies is definitely on the same level.

It is a very well done film, not your typical ‘things go bump in the night’ style horror film. It has a great premise and is executed wonderfully through a strong story and a strong cast.

One of the only films to successfully make me scream in a theater. Thanks, Dark Skies for many eerie and spook-filled nights!

This a must-see for horror buffs!