I recently proposed a question to guest bloggers: If you could live anywhere–a real life place, a world created in stories or books, worlds from movies or games, where would you choose and why?

An interviewer once asked me if I considered myself a Southern writer — I told her that was an easy yes. After all, I qualified on every count I could possibly imagine. I’m from the South, raised in the flatlands of Middle Georgia. I live in the South, in a small town near Savannah. And I write a mystery series set in Atlanta featuring characters who also have pedigrees that place them firmly on the non-Northern side of the Mason-Dixon line.

For a writer who enjoys exploring themes of identity, growing pains, and the challenges of stretching one’s boundaries, Atlanta provide fertile creative ground for both my characters and me. The Atlanta of my imagination is quite different from the one I that exists in the real world, however, and if I had the chance to visit one imaginary place, this would be where I’d go — my own personal Atlanta. 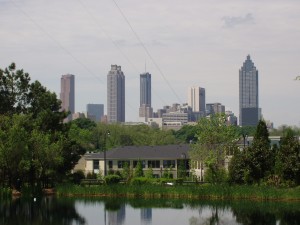 For one thing, my Atlanta has Tai and Trey in it. Over the years I’ve grown fond of my liberal feminist gunshop owner and her former SWAT partner in all things romantic and crime-solving. If I had access to their Atlanta, she and I could share a hot coffee and Krispy Kreme donut, or some Cuban food in Little Five Points, maybe go dancing at Tongue and Groove (which would have convenient parking and be a no-frat-boy zone in my Atlanta). Or I could have Trey drive me through the steel and glass corridors of Downtown in his Ferrari, feeling the sweet zing of acceleration at each stoplight, from zero to sixty in about three seconds (which could never happen in real Atlanta, since traffic is notoriously congested and slow off the green).

There would be no smog in my Atlanta, none of summer’s infamous yellow haze clouding the sky. The stars would be clear and crystalline all year round. The temperature would hover in the upper seventies in the spring, the low eighties in the summer, the better to walk Piedmont and Centennial Parks, appreciating the dogwoods and azaleas and cherry trees in blossom. It would rain frequently in my Atlanta, washing the pollen from the sidewalks and keeping the grass thick and green. But there would be no humidity in my Atlanta — no, ma’am. Good hair days for all! 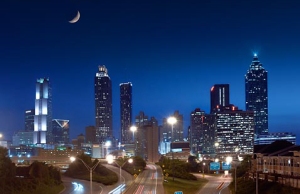 In my Atlanta, General Sherman would have spared the torch, and much of the city’s antebellum architecture would remain. But even as I ponder that city — one that didn’t have to drag itself from its ashes, like the mythical Phoenix that to this day adorns the city seal — I realize that while that fictitious version of Atlanta might be prettier, it wouldn’t have the spark and grit of the current city. The real Atlanta may not be an exquisitely preserved Southern belle, but I rather like the mud-cheeked tomboy it became. Like Peter Pan, never quite growing up. 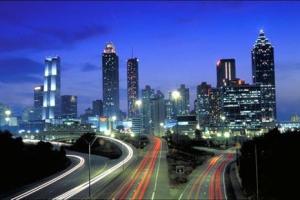 Despite my appreciation and affection for this city, I’ve never gotten the chance to live there. We’re perpetual kissing cousins, Atlanta and I. But even now, forty years after my first visit, I still get a thrill every time I head up I-75 and see it rising at the horizon like Oz, then dipping behind green stands of trees, only to reappear at a different angle, but always in the distance, always just ahead.

Tina Whittle is a mystery writer living and working in the Georgia Lowcountry. The Dangerous Edge of Things, her first novel, debuted February 2011 from Poisoned Pen Press, followed in March 2012 by Darker Than Any Shadow. Described by Publisher’s Weekly as a “tight, suspenseful debut,” this Atlanta-based series features gun shop owner Tai Randolph and corporate security agent Trey Seaver. The third book in the series — Blood, Ash and Bone – is available March 2013.

A nominee for Georgia Author of the Year in 2012, Whittle’s short fiction has appeared in The Savannah Literary Journal, Alfred Hitchcock’s Mystery Magazine, and Gulf Stream, which selected her story “Lost Causes and Other Reasons to Live” as the 2004 winner of their Mystery Fiction contest. When not writing or reading, she enjoys golf, sushi, mini-pilgrimages, and spending time with her family (one husband, one daughter, one neurotic Maltese and three chickens).

A Canadian gal that firmly believes words can change the world. An avid reader, writer and Halloween enthusiast. She has a special interest in communications and writes for pleasure and profession. She moonlights as a metaphysical maven with a knack for creating magical crystal jewelry and holiday accessories.
View all posts by Maison Moonchild →
This entry was posted in Guest Blog Entries and tagged Ash and Bone, Author Dream world, Author Tina Whittle, Tina Whittle, Tina Whittle Blood, Tina Whittle Dream ATL. Bookmark the permalink.