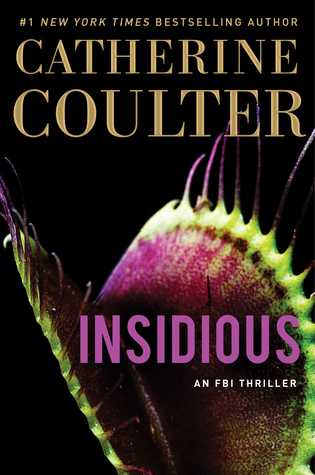 Insidious is the twentieth thriller in #1 New York Times bestselling author Catherine Coulter’s FBI series. FBI agents Savich and Sherlock must discover who is trying to murder Venus Rasmussen, a powerful, wealthy society icon. They soon find out that the danger may be closer than expected.

Venus Rasmussen, a powerful woman who runs the international conglomerate Rasmussen Industries, believes someone is poisoning her. After Savich and Sherlock visit with her, someone attempts to shoot her in broad daylight. Who’s trying to kill her and why? A member of her rapacious family, or her grandson who’s been missing for ten years and suddenly reappears? Savich and Sherlock must peel away the layers to uncover the incredible truth about who would target Venus.

Meanwhile, Special Agent Cam Wittier leaves Washington for Los Angeles to work with local Detective Daniel Montoya to lead the hunt for the Starlet Slasher, a serial killer who has cut the throats of five young actresses. When a sixth young actress is murdered, Cam comes to realize the truth might be closer than she’d ever want to believe.

With breakneck speed and unexpected twists and turns, Coulter’s Insidious will leave you breathless until the shocking conclusion.

This was my first journey into Catherine Coulter’s literary world and it certainly won’t be my last. Simon and Schuster provided me with a review copy (I couldn’t be more pleased to have been privileged enough to read this title.)

Prior to this, I wasn’t even aware of the FBI series, 20 books! Wowza, Coulter sure is doing something right!

I love reading mysteries, and this one did not disappoint by any means. I loved the fully rounded characters and the successful execution of two mysteries running parallel throughout the story.

Savich and Sherlock are looking into the possible poisoning of one of his grandmother’s old friends and FBI Agent Cam Wittier and Detective Daniel are working together in California trying to track down a vicious serial killer that is killing young and beautiful movie stars.I was equally intrigued by both storyline…This is something rare for an author to achieve. It’s difficult to write characters so well that readers are equally concerned and intrigued by every party discussed.

I loved the dialogue and interaction between characters. It reads as sincere and authentic.

The story follows a well paced plot that keeps you on your toes. Entering book #20 as a new reader there were several things I needed to catch up on, but it was still enjoyable and a great read!

A Canadian gal that firmly believes words can change the world. An avid reader, writer and Autumn/Winter lover. She excels at communications and writes for pleasure and profession.
View all posts by Lisa Lunney →
This entry was posted in Poetry and tagged Catherine Coulter, Fall mystery reads 2016, FBI Series #20 Insidious, Insidious by Catherine Coulter, simon and schuster canada. Bookmark the permalink.