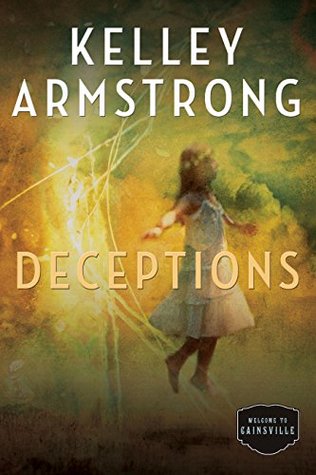 Olivia Jones is desperate for the truth. The daughter of convicted serial killers, she has begun to suspect that her parents are innocent of their crimes. But who can she trust, in a world where betrayal and deception hide in every shadow?

Liv does have one secret weapon: a mysterious sixth sense that helps her to anticipate danger. The trouble is, this rare power comes with its own risks. There are dark forces that want to exploit Liv’s talents – and will stop at nothing to win her to their side.

Now Liv must decide, before it’s too late. Who does she love? Who is really on her side? And can she save herself without burning down everything that matters most?

Oh, my goodness…How I love Kelley Armstrong. I am so, so proud this astounding author hails from the great country of Canada, she makes my sovereign pride soar.

I was suffering such heartbreak after the ending of Armstrong’s, Women of the Otherworld series…then I was introduced to Cainsville. Dare I say? I may in fact love this series more than the Otherworld.

Omens and Visions opened up the world of Cainsville and all the lies, chaos, love triangles and madness that it consists of. Deceptions elaborates on everything we have previously been introduced to. The characters endure significant trials and are nowhere near the same people we were first introduced to. Some have found strength, some have embraced weakness, and some well, they have simply lost their way.

This book answers many searing questions presented in the first two entries in the series. Personally, it is my favourite contribution to Cainsville thus far. I say this every time Kelley releases a new book; so I am quite certain the next book will also be another favourite.

One last thing to touch on?

How awesome is it that Kelley always includes fantastic legends and myths? I LOVE IT!

A Canadian gal that firmly believes words can change the world. An avid reader, writer and Autumn/Winter lover. She excels at communications and writes for pleasure and profession.
View all posts by Lisa Lunney →
This entry was posted in Poetry and tagged Cainsville Deceptions, Deceptions, Kelley Armstrong, Kelley Armstrong Deceptions. Bookmark the permalink.