Empire of Night (Age of Legends #2) by Kelley Armstrong 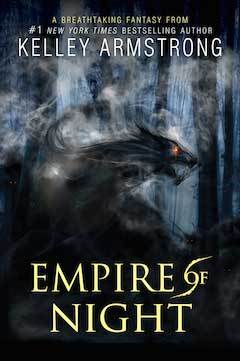 Sisters Moria and Ashyn are the Keeper and Seeker of Edgewood. Or at least, they were.

Their village is gone. Their friends have betrayed them. And now, the emperor has sent them on a mission to rescue the children of Edgewood—accompanied by Prince Tyrus and a small band of imperial warriors. But the journey proves more perilous than they could have imagined. With treachery and unrest mounting in the empire, Moria and Ashyn will have to draw on all their influence and power to overcome deadly enemies—not all of them human—and even avert an all-out war.

Kelley Armstrong is a master in the world of storyteller. From Ya targeted stories to adult fiction, she is a master wordsmith. She has an ability unlike any author I’ve ever read, to bring characters and worlds to life. To truly make us, the reader emotionally connect with the characters world and how they navigate through the storyline.

Every time I finish a new Armstrong book, I make the bold statement, now this, this is my favourite. Every single time. She is an author who grows with her readers, and goes above and beyond expectations every time.

The Age of Legends series is a phenomenal storyline fueled by powerful young characters that readers simply adore. The comraderie between sisters and their animal protectors marginalizes the audience and appeals to not only girls, this high fantasy lures teenage boys in to the series and the end result–happy readers around the world.

I love the bond of the animals. Risking anything to save their girls. Existing, solely because of the two sisters. It is such high fantasy that as the story unfolds in the readers mind, it becomes a great paradox the unbelievable nature of the story makes it seem real.

A Canadian gal that firmly believes words can change the world. An avid reader, writer and Halloween enthusiast. She has a special interest in communications and writes for pleasure and profession. She moonlights as a metaphysical maven with a knack for creating magical crystal jewelry and holiday accessories.
View all posts by Maison Moonchild →
This entry was posted in Poetry and tagged 2015 Fantasy Releases, Age of Legends, Canada YA Fiction, Empire of Night, Harper Collins, Kelley Armstrong, kelley armstrong series, summer 2015 reading list, YA Fantasy Reads, YA Summer Reads. Bookmark the permalink.

1 Response to Book Review: Empire of Night (Age of Legends #2) by Kelley Armstrong