The Well by Catherine Chanter 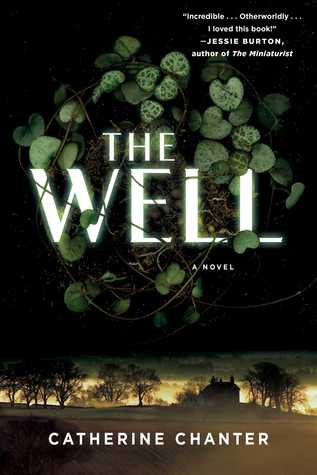 From the winner of the Lucy Cavendish Fiction Prize, a brilliantly haunting and suspenseful debut set in modern-day Britain where water is running out everywhere except at The Well; the farm of one seemingly ordinary family whose mysterious good fortune leads to suspicion, chaos, and ultimately a shocking act of violence.

Ruth Ardingly has just been released from prison to serve out a sentence of house arrest for arson and suspected murder at her farm, The Well. Beyond its borders, some people whisper she is a witch; others a messiah. For as soon as Ruth returns to The Well, rain begins to fall on the farm. And it has not rained anywhere else in the country in over three years.

Ruth and her husband Mark had moved years before from London to this ancient idyll in the hopes of starting their lives over. But then the drought began, and as the surrounding land dried up and died, and The Well grew lush and full of life, they came to see their fortune would come at a price. From the envy of their neighbors to the mandates of the government, from the fanaticism of a religious order called the Sisters of the Rose to the everyday difficulties of staying close as husband and wife, mother and child; all these forces led to a horrifying crime: the death of their seven-year-old grandson, drowned with cruel irony in one of the few ponds left in the countryside.

Now back at The Well, Ruth must piece together the tragedy that shattered her marriage, her family, and her dream. For she believes her grandson’s death was no accident, and that the murderer is among the people she trusted most. Alone except for her guards on a tiny green jewel in a world rapidly turning to dust, Ruth begins to confront her worst fears and learns what really happened in the dark heart of The Well.

A tour de force about ordinary people caught in the tide of an extraordinary situation, Catherine Chanter’s The Well is a haunting, beautifully written, and utterly believable novel that probes the fragility of our personal relationships and the mystical connection between people and the places they call home.

I finished this book well over a month ago and it still lingers in my mind. Certainly one of the best reads of 2015. The Well, is a story I could gush about for hours, but the only way to perfectly sum it up–you must read it to understand it’s true beauty.

The Well is incredibly vivid and detailed. You instantly find yourself attached to the characters and invest copious amounts of emotion into their wellbeing and happiness.

This is a rare book where perverse hope and devastating sadness interline within the same storyline. Perhaps that is what makes the characters so easy to identify with, they are ultimately human–filled with flaws. We witness them question the world and everything in it, readers hearts break alongside the characters.

A Canadian gal that firmly believes words can change the world. An avid reader, writer and Autumn/Winter lover. She excels at communications and writes for pleasure and profession.
View all posts by Lisa Lunney →
This entry was posted in Poetry and tagged 2015 Top Reads, summer 2015 reading list, The Well, The Well Book Review, The Well by Catherine Chanter, Top Summer Reads 2015. Bookmark the permalink.

1 Response to Book Review: The Well by Catherine Chanter