Rapunzel’s tower is a satellite. She can’t let down her hair—or her guard.

In this third book in the bestselling Lunar Chronicles series, Cinder and Captain Thorne are fugitives on the run, with Scarlet and Wolf in tow. Together, they’re plotting to overthrow Queen Levana and her army.

Their best hope lies with Cress, who has been trapped on a satellite since childhood with only her netscreens as company. All that screen time has made Cress an excellent hacker—unfortunately, she’s just received orders from Levana to track down Cinder and her handsome accomplice.

When a daring rescue goes awry, the group is separated. Cress finally has her freedom, but it comes at a high price. Meanwhile, Queen Levana will let nothing stop her marriage to Emperor Kai. Cress, Scarlet, and Cinder may not have signed up to save the world, but they may be the only ones who can.

By far the best entry in the series. Before reading Cress, Cinder was my favourite protagonist in the series. She is a badass cyborg with sharp wit and general awesomeness. Now that I have read Cress and learned about beloved Crescent’s character, she is fantastic, a true force to be reckoned with.

I feel the need to mention again just how creative and unique this series of books is. Marissa Meyer knows how to tell a compelling story, she reels her readers in and won’t let them go! I still can’t believe how two-years ago I was reluctant to read Cinder. I remember it sat on my shelf for about three months before I finally picked it up and devoured it.

There are many book snobs as I like to call them, the sort of reader who won’t pick up a book categorized as YA because it is too ‘elementary’ I am only mentioning these ‘book snobs’ because I have introduced many of these sorts of readers to Marissa Meyer’s Lunar Chronicles and every single ‘book snob’ adored the stories. Marissa executes a perfect story for EVERY reader. Her stories are rich with action, well-rounded characters and excellent prose. 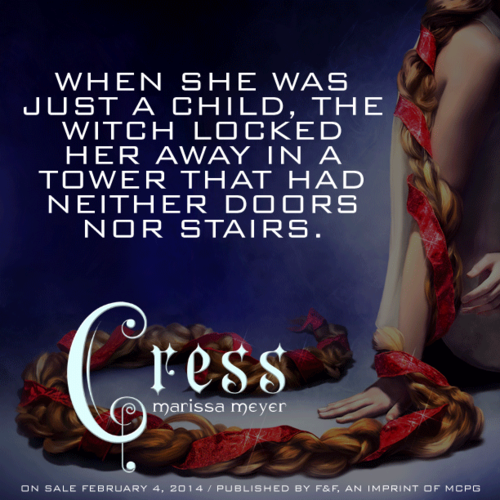 Queen Levana is such a perfect villain. There is absolutely no humanity in her, nothing to make the reader think, well hey she’s had it rough. The action and intensity of the story packs a bigger punch when the reader can feel the emotions of the protagonists. We can identify with Scarlet’s anger, Cinder’s horrid past and Cress’s bravery to be free. These beloved characters are all flawed because of the big, bad Queen Levana. The reader wants to see her stopped just as much as our characters need her to be.

Absolutely fantastic. Fans of the series will be more than impressed.

Thank you, Raincoast Books for the review copy.

A Canadian gal that firmly believes words can change the world. An avid reader, writer and Halloween enthusiast. She has a special interest in communications and writes for pleasure and profession. She moonlights as a metaphysical maven with a knack for creating magical crystal jewelry and holiday accessories.
View all posts by Maison Moonchild →
This entry was posted in Book Reviews, Author Interviews & More! and tagged Cinder, Cress Review, Marissa Meyer, Marissa Meyer YA Lunar Chronicles Series, Scarlet, The Lunar Chronicles Cress. Bookmark the permalink.