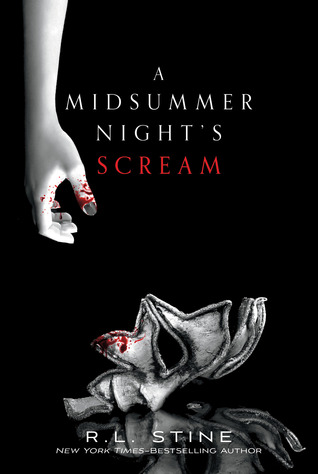 Get ready for laughter to turn into screams in R.L. Stine’s re-imagining of Shakespeare’s classic romantic comedy A Midsummer Night’s Dream.

Everyone knows that Mayhem Manor is cursed. After production on the horror film was stopped due to a series of mysterious deaths, it became a Hollywood legend–which makes it perfect for Claire and her family. If they can successfully finish the film, it should be enough to save their ailing movie studio.

Sure, the old haunted house is creepy, and strange stuff has been happening, but this is Claire’s chance. Her chance to become the movie star she’s always dreamed and her chance to finally convince her friend Jake that she is girlfriend material. Of course, the fact that Jake thinks he’s in love with her best friend, Delia, who is crushing hard on Jake’s friend Shawn, who insists on following Claire around, could be a problem, but Claire is sure she can figure it out. After all, the course of true love never did run smooth.

But once shooting starts, “creepy and strange” morph into “bloody and deadly,” as the lines between film and reality begin to blur…

I really, really wanted to like this. The synopsis was so intriguing and promising, and to boot; the cover was stunning! The premise was so cool, and it seemed like it would be my kind-of book.

Unfortunately. I was wrong. The world R.L Stine created was carefully crafted and easy to get lost in. But, the story failed to stir up any emotional attachment both to the characters, and the plot. I loved Fear Street, and Goosebumps growing up, so I have a soft spot for R.L Stine.

With that being said. I am thinking of ways this book can redeem itself. Perhaps if it is an easily spooked reader, or a non-seasoned reader? The story just flopped. It had cool elements, but the execution failed…

On that note, check out Red Rain by R.L Stine! It is great.

Thank you, Raincoast Books for providing the review copy.