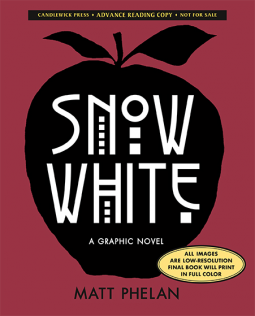 The scene: New York City. The dazzling lights cast shadows that grow ever darker as the glitzy prosperity of the Roaring Twenties screeches to a halt. Enter a cast of familiar characters: a young girl, Samantha White, returning after being sent away by her cruel stepmother, the Queen of the Follies, years earlier; her father, the King of Wall Street, who survives the stock market crash only to suffer a strange and sudden death; seven street urchins, brave protectors for a girl as pure as snow; and a mysterious stock ticker that holds the stepmother in its thrall, churning out ticker tape imprinted with the wicked words “Another . . . More Beautiful . . . KILL.” 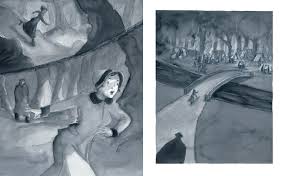 In a moody, cinematic new telling of a beloved fairy tale, extraordinary graphic novelist Matt Phelan captures the essence of classic film noir on the page—and draws a striking distinction between good and evil.

This is a stunning story. The dark interpretation of Snow White instantly lured me in, Snow White has always been my favourite Disney Princess, it’s nice see to her come to life in a new way.

Fantastic writing paired with incredible imagery–this one is a winner!

A Canadian gal that firmly believes words can change the world. An avid reader, writer and Halloween enthusiast. She has a special interest in communications and writes for pleasure and profession. She moonlights as a metaphysical maven with a knack for creating magical crystal jewelry and holiday accessories.
View all posts by Maison Moonchild →
This entry was posted in Book Reviews, Author Interviews & More! and tagged 2016 Graphic novels, Must Reads of 2016, Snow White by Matt Phelan, Snow White Graphic Novel. Bookmark the permalink.