The Amityville Horror by Jay Anson 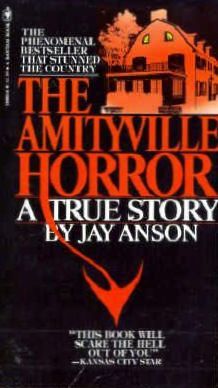 On December 18, 1975, a young family of five moved into their new home, complete with finished basement, swimming pool, and boathouse. Twenty-eight days later, they fled in terror, leaving most of their belongings behind. — The fantastic story of their experiences was widely publicized on network television, newspapers, and national magazines. But the Lutz family never disclosed the full details to the media. Now, their own carefully-reconstructed memories — and independent interviews with local clergy and police — reveal their entire harrowing story.

George and Kathleen Lutz were aware that the house had been the scene of a mass murder — Ronnie DeFeo, 23, was convicted of shooting his parents, brothers, and sisters. But it seemed an ideal home for them and their three children, and the price was right. On the day they moved in, a priest invited to bless the house was told by an unseen voice to “Get out!” At his rectory, he began to suffer a series of inexplicable afflictions. Meanwhile, alone in their new home, the Lutz family were embarking on the most terrifying experience of their lives. It began when their five-year-old daughter boasted of her new playmate, someone — or something — named “Jodie.”

THE AMITYVILLE HORROR is an unforgettable book with all the shocks and gripping suspense of THE EXORCIST, THE OMEN, or ROSEMARY’S BABY — but with one vital difference! As the author reports, “To the extent that I can verify them, all the events in this book are true.”

The reading world is clearly divided by this book, you either love it or hate it–no in-between. I am among those that love it, and am equally horrified by it. This is a book I will never be able to read again. I was genuinely terrified, which for me, takes alot.

Whether the story is fact or fiction, the book is a horrific story brought to life through clever use of imagery and dynamic characters.The story is written so ‘matter of fact’ that it does come across as true. Is it? Who knows…All I know is the terror is sure real.

This book is simply too much for me. I find books linger in my mind much longer than films. The watered down film versions, sure I can handle. The book? NO!

Which makes it the perfect Halloween read…for those who dare. Halloween is not complete without indulging in the Amityville Horror, whether it be the films or the book. It is a must!

A Canadian gal that firmly believes words can change the world. An avid reader, writer and Halloween enthusiast. She has a special interest in communications and writes for pleasure and profession. She moonlights as a metaphysical maven with a knack for creating magical crystal jewelry and holiday accessories.
View all posts by Maison Moonchild →
This entry was posted in Halloween and tagged Books to Film, Ed Warren, Halloween, Halloween Reads, Horror Reads, Jay Anson, Lorraine Warren, The Amityville Horror, The Amityville Horror by Jay Anson, The Warrens. Bookmark the permalink.