31 Days of Halloween: The Halloween Tree

My absolute favourite childhood Halloween movie is one that NO ONE HAS HEARD OF! Before, it was aired annually on Halloween. Over the years, for reasons unknown it has stopped airing on television, and is the hardest movie to get your hands on! The book is readily available at every major bookstore chain. But, it is simply not the same! If you get a chance to watch the film, DO IT! Here is the trailer for this classic:

is an Emmy Award-winning 1993 feature-length animated television movie produced by Hanna-Barbera based on Ray Bradbury‘s 1972 fantasy novel of the same name.

It tells the story of a group of trick-or-treating children who learn about the origins and influences of Halloween when one of their friends is spirited away by mysterious forces.

The film opens to the voice of a narrator (Ray Bradbury) describing one small town’s preparations for Halloween night. Four friends are shown at their respective homes donning costumes excitedly: Jenny as a witch, Ralph as a mummy; Wally as a monster; and finally Tom Skelton as a skeleton. They all hurry so as not be late meeting up with each other and the unseen Pip (described as their communal best friend and the greatest boy who ever lived). Jenny, Wally, Ralph and Tom meet up, but Pip is absent. Believing it a trick, as Pip would never miss his favorite holiday, the four head to Pip’s home on the edge of town.

They arrive at Pip’s house, only to find it bare of decoration, with no pumpkins or bowls of candy set out on the porch, and Pip being loaded into the back of an ambulance, with his parents to ride with him. A note on the door written by Pip explains that he is being rushed off for an emergency appendectomy, an operation he may die without, and that his will is they start Halloween without him. Worried about their friend and not willing to trick-or-treat with him absent, the four friends follow the path of the ambulance to visit him at the hospital. Tom suggests they take a short-cut, one Wally nervously announces would take them through a dark and eerie ravine. As they approach it, Jenny and Tom see what looks like Pip running through the path which cuts through the ravine. Wally posits he can see right through Pip, but Ralph shrugs it off. Tom, convinced that Pip has designed this elaborate hoax for the four of them, continues on. The group races after Pip through the mysterious and twisting forest path, going deeper into the shadowy ravine. Falling behind Pip along the way, they wind up in sight of a towering and darkened mansion. 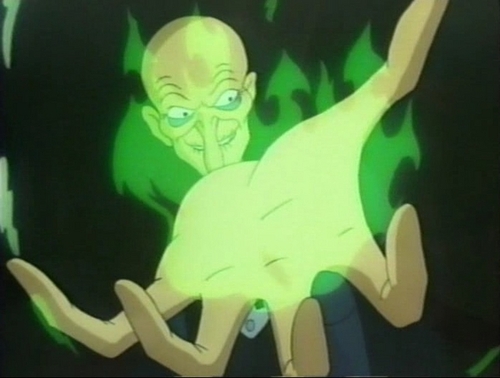 After knocking on the door they meet a man named Moundshroud. Moundshroud expresses disappointment that none of the children know what their costumes symbolize. It is revealed that Moundshroud is after the ghost of Pip, whom the protagonists followed to the house. It is also revealed that Pip is after a pumpkin with his face carved into it and escapes with it. Tom begs Moundshroud to let them come and help bring back Pip. Though Moundshroud initially refuses, as they know nothing of the true origins of Halloween, he relents — if they can keep up with him before dawn, then they might just be able to retrieve the pumpkin and get Pip back, while also going on a scavenger hunt of sorts to learn why they are dressed as they are and where Halloween comes from. Moundshroud fashions a giant kite from hundreds of posters from the side of an abandoned barn (with the children serving as the tail) and they begin their pursuit. Pip uses the magic of the pumpkin to travel back over 4,000 Halloweens ago, and the group follows.

This children travel to Halloweens past, learning why they are dressed as they are. First, they travel to Egypt to learn of the Book of the Dead and the significance of mummification. Next, they witness old rituals carried out by Celtic druids, learning the origin and myths of witches. They travel next to an unfinished Notre Dame Cathedral (which they finish in a matter of minutes with Moundshroud’s magic) to learn of the Cathedral’s use of gargoyles and demons to ward off evil spirits. They finally arrive in Mexico, where the significance of skeletons is revealed, and where the Day of the Dead is celebrated as a means of overcoming one’s fear of death. It is in an old tomb in Mexico that they catch up to Pip— too late to save him. 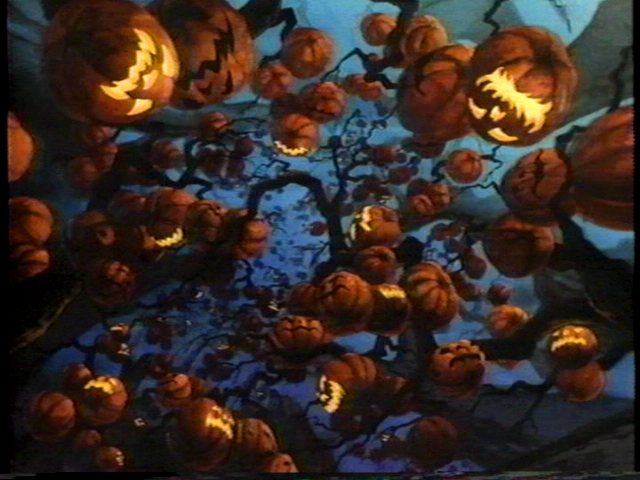 Moundshroud tells the children they did not make it in time and Pip is now his property, symbolized by his pumpkin. The children, eager to have their friend back, bargain a year from each of their lives in exchange for Pip’s. Moundshroud accepts the deal, and they are teleported home. The children rush to Pip’s house once more, to see if the entire ordeal was in fact real, and are delighted to see their friend back from the hospital. He recounts the journey as a dream he experienced during surgery. The movie ends with Moundshroud disappearing into a pumpkin shaped like him, while the Halloween Tree is assaulted by strong winds, blowing all the pumpkins away into the sky— all except for Pip’s pumpkin, which remains on his porch.