Halloween. All Hallow’s Eve. Samhain. Whatever you want to call the 31st day of October, one thing is for sure, you can bet spooks and frights are bound to pay you a visit. Watching horror films is one way many people get into the spirit of the holiday. When Lisa asked me to be a guest blogger for her 31 Days of Halloween, I jumped at the chance. But then I became stumped. What movie deserved mention as something that gets me in the Halloween spirit? So many deserve to be mentioned but which one really makes me think “Halloween?”

Slasher flicks aren’t really my thing. I prefer the spooky, the creepy, the eerie, the spine-tingling, something’s-watching-over-your-shoulder type movie. In my opinion, very few movies evoke these emotions.

So which one did I pick? The 1979 version of the Amityville Horror.

This movie is based on a true story based that was claimed by writer Jay Anson.  “The Amityville Horror is about a large house on the coast of Long Island where newly weds George and Kathy Lutz and their three children move into the house that they hope will be their dream house but it ends up in terror.” (IMDB)

The Lutz family is warned by the real estate agent about the house’s history. Thirteen months before the family moves in the previous owner, Ronald DeFeo Jr. had shot and killed six members of his family at the house. Despite this knowledge, the Lutz family decided to purchase the house anyway claiming “houses don’t have memories.”  George Lutz appears not be strong in faith, but his wife Kathy is a nominal Catholic, so they enlist in Father Delaney to bless the home. Father Delaney encounters many obstacles while trying to bless the home including a room full of flies, out of season, violent stomach sickness, and later, blisters on his palm when trying to make even a phone contact with Kathy at the home.

In his further efforts to confront the evil, he suffers a car wreck from brake and steering malfunction, a lack of support by his superiors in the diocese as he describes the occult things he’s seen, and ultimately, blindness and a mental breakdown. 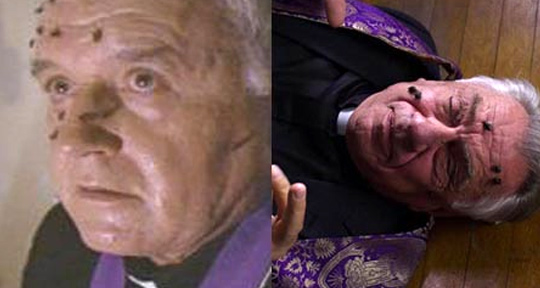 George begins to be more sullen and angry over perceived cold in the house, and obsesses with splitting logs and keeping the fireplace stoked. One of the two boys suffers a crushed hand when a sash window falls on it, and the little girl has an imaginary friend, Jody, who seems to be of a malevolent nature. Mom, Kathy, catches a glimpse of two red, swine-like eyes, outside the daughter’s 2nd story window. The family dog, Harry, a black Labrador, obsesses over a secret room in the basement.

George’s land surveying business begins to suffer with his lack of attendance, and his partner is concerned. The business partner’s wife, very sensitive to the paranormal, is at once both repulsed and intrigued by the things she feels when at the house. “Boy, are these vibes ever strong!” she says at one point.

The Lutz’s witness a black, bubbling substance coming up in the toilets, an “ooze” coming down from nail holes in the walls, a babysitter being trapped in a closet despite its not having a locking doorknob, the disappearance of $1,500.00 cash, and Kathy’s Aunt, a nun, running from the house and vomiting. Kathy observes George’s persistent waking at 3:15 am, feeling he must go check on the boathouse, and other unsettling incidents. Kathy has nightmares in which she is given details about the killings of the home’s prior family.

Their research at the library and at the county records office suggest that the house is built atop a tribal burial ground, and that a known devil worshiper named Ketcham had once lived on the land.

Finally, the paranormal events drive the family to flee the house one night, in the pouring rain, no longer even worried about their possessions. The final titles tell us that, “Today the Lutz’s live in another state.”

For more on The Amityville Horror—the re-make, and the novel check out: the-amityville-horror

Teresa Fisher is a Canadian aspiring writer. She is passionate about bellydancing, and enjoys using dance as a creative outlet. Teresa is an eccentric young lady, with a bright future in store.

A Canadian gal that firmly believes words can change the world. An avid reader, writer and Autumn/Winter lover. She excels at communications and writes for pleasure and profession.
View all posts by Lisa Lunney →
This entry was posted in Halloween and tagged 1979 Amityville Horror, Amityville Horror, Halloween, Halloween Hits, James Brolin Horror Film, Lutz Family Horror, The Amityville Horror Original. Bookmark the permalink.