I could write an entry about some of my favourite psychological horrors, but I think those films are about initial shock and instant adrenalin rushes. The following movie is something I watch over and over, it has a certain charm to it and is hard to find anything compared to it in modern movies.

While with his girlfriend Amy Peterson in his bedroom, the teenager Charley Brewster sees a coffin being transported to the house on the next door. A couple of days later, he concludes that his neighbor Jerry Dandrige  is a vampire, who is committing some recent unsolved murders. 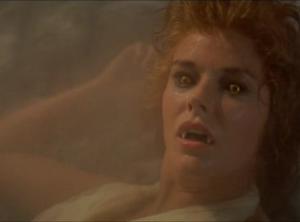 Charley decides to look for help first his friend Evil Ed Thompson, since the policemen do not believe on his accusation. Jerry is upset and promises to kill Charley.

Later, he meets Peter Vincent , a middle aged man, who is a vampire killer in a television show but does not believe on vampires in the real life. Amy and Ed seek out Peter Vincent, and the group tries to prove to Charley that Jerry is not a vampire.

I recently purchased Fright Night on DVD without having ever seeing it before, but it reached out to me, being a fan of 80’s movies and especially 80’s vampire movies, I knew I had to see it.

It didn’t dissapoint, from the acting to the amazing soundtrack, this is an all-round masterpiece.

There is just a trailer in the extras on the DVD, but it suffices.

Marie is a make-up artist from Ireland. This beauty queen loves creating artistic creations on a human canvas. Her work has been published in several magazines, and she is world renowned for her craft. Marie loves all things creepy and cute.

A peek at her fabulous work: