The October Game by Ray Bradbury 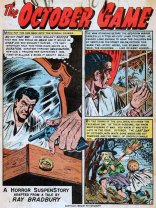 programme from here on was to be enacted in the dark, he as Mr
Interlocutor. There was a child scampering, a smell of damp cement,
and the sound of the wind out in the October stars.
‘Now!’ cried the husband in the dark cellar. ‘Quiet!’
Everybody settled.
The room was black black. Not a light, not a shine, not a glint of
an eye.
A scraping of crockery, a metal rattle.
‘The witch is dead,’ intoned the husband.
‘Eeeeeeeeeeeeeeeeeee,’ said the children.
‘The witch is dead, she has been killed, and here is the knife she
was killed with.’ He handed over the knife. It was passed from hand to
hand, down and around the circle, with chuckles and little odd cries
and comments from the adults.
‘The witch is dead, and this is her head,’ whispered the husband,
and handed an item to the nearest person.
‘Oh, I know how this game is played,’ some child cried, happily, in
the dark. ‘He gets some old chicken innards from the icebox and hands
them around and says, “These are her innards!” And he makes a clay
head and passes it for her head, and passes a soup bone for her arm.
And he takes a marble and says, “This is her eye!” And he takes some
corn and says, “This is her teeth!” And he takes a sack of plum
pudding and gives that and says, “This is her stomach!&” I know how
this is played!’
‘Hush, you’ll spoil everything,’ some girl said.
‘The witch came to harm, and this is her arm,’ said Mich.
‘Eeeeeeeeeeee!’
The items were passed and passed, like hot potatoes, around the
cirle. Some children screamed, wouldn’t touch them. Some ran from
their chairs to stand in the centre of the cellar until the grisly
items had passed.
‘Aw, it’s only chicken insides,’ scoffed a boy. ‘Come back, Helen!’
Shot from hand to hand, with small scream after scream, the items
went down, down, to be followed by another and another.
‘The witch cut apart, and this is her heart,’ said the husband.
Six or seven items moving at once through the laughing, trembling
dark.
Louise spoke up. ‘Marion, don’t be afraid; it’s only play.”
Marion didn’t say anything.
‘Marion?, asked Louise. ‘Are you afraid?’
Marion didn’t speak.
‘She’s all right,’ said the husband. ‘She’s not afraid.’
On and on the passing, the screams, the hilarity.
The autumn wind sighed about the house. And he, the husband stood
at the head of the dark cellar, intoning the words, handing out the
items.
‘Marion?’ asked Louise again, from far across the cellar.
Everybody was talking.
‘Marion?’ called Louise.
Everybody quieted.
‘Marion, answer me, are you afraid?’
Marion didn’t answer.
The husband stood there, at the bottom of the cellar steps.
Louise called ‘Marion, are you there?’
No answer. The room was silent.
‘Where’s Marion?’ called Louise.
‘She was here’, said a boy.
‘Maybe she’s upstairs.’
‘Marion!’
No answer. It was quiet.
Louise cried out, ‘Marion, Marion!’
‘Turn on the lights,’ said one of the adults.
The items stopped passing. The children and adults sat with the
witch’s items in their hands.
‘No.’ Louise gasped. There was a scraping of her chair, wildly, in
the dark. ‘No. Don’t turn on the lights, oh, God, God, God, don’t turn
them on, please, don’t turn on the lights, don’t!.Louise was shrieking
now. The entire cellar froze with the scream.
Nobody moved.
Everyone sat in the dark cellar, suspended in the suddenly frozen
task of this October game; the wind blew outside, banging the house,
the smell of pumpkins and apples filled the room with the smell of the
objects in their fingers while one boy cried, ‘I’ll go upstairs and
look!’ and he ran upstairs hopefully and out around the house, four
times around the house, calling, ‘Marion, Marion, Marion!’ over and
over and at last coming slowly down the stairs into the waiting
breathing cellar and saying to the darkenss, ‘I can’t find her.’

Then …… some idiot turned on the lights.

A Canadian gal that firmly believes words can change the world. An avid reader, writer and Halloween enthusiast. She has a special interest in communications and writes for pleasure and profession. She moonlights as a metaphysical maven with a knack for creating magical crystal jewelry and holiday accessories.
View all posts by Maison Moonchild →
This entry was posted in Book Reviews, Author Interviews & More!, Halloween and tagged halloween reading list, Halloween Reads, Halloween Short Stories, rare ray bradbury, ray bradbury halloween, ray bradbury the october game, the october game. Bookmark the permalink.