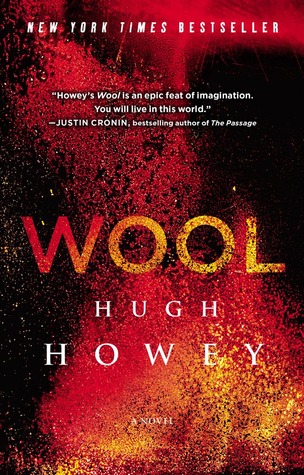 In a ruined and toxic landscape, a community exists in a giant silo underground, hundreds of stories deep. There, men and women live in a society full of regulations they believe are meant to protect them. Sheriff Holston, who has unwaveringly upheld the silo’s rules for years, unexpectedly breaks the greatest taboo of all: He asks to go outside.

His fateful decision unleashes a drastic series of events. An unlikely candidate is appointed to replace him: Juliette, a mechanic with no training in law, whose special knack is fixing machines. Now Juliette is about to be entrusted with fixing her silo, and she will soon learn just how badly her world is broken. The silo is about to confront what its history has only hinted about and its inhabitants have never dared to whisper.

Oddly, Wool reminded me of an episode of the X-Files. It had the dark, dystopian, mysterious feel to it. It is really hard to describe the world created in Wool, it is horrifying and yet at the same time intriguing.

The Wool Omnibus creates an absorbing dystopian world of oppression and treachery. The inhabitants of this world live underground in a silo, the outside world above ground is hostile and toxic, a world they can only see on video screens. The political climate is almost as poisonous as that outside. It is a world of nightmares, literally. Those who voice their unhappiness are sentenced to death. It is believable, and frightening.

I would love to see this as a television series, or a film. This story is so uniquely crafted there are so many ways for it to continue on different mediums.

Hugh Howey is a magnificent storyteller. He has crafted a signature style of prose that pays very close attention to detail. Reminiscent to the works of Bradbury and Lovecraft,

I hope the open ending means there will be more in store for Sil0-18.

If anyone is debating reading this, yes,yes yes, READ IT! One of the most engrossing stories you will ever encounter.

A Canadian gal that firmly believes words can change the world. An avid reader, writer and Halloween enthusiast. She has a special interest in communications and writes for pleasure and profession. She moonlights as a metaphysical maven with a knack for creating magical crystal jewelry and holiday accessories.
View all posts by Maison Moonchild →
This entry was posted in Book Reviews, Author Interviews & More! and tagged Books Similar to Divergent, Bradbury, Dystopian Reads, Hugh Howey, Lovecraft, Silo-18, Wool, Wool Hugh Howey, Wool Omnibus Review, Wool Review. Bookmark the permalink.