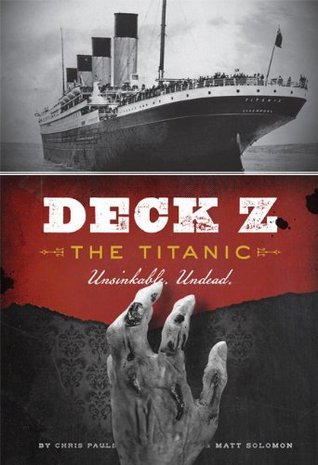 Imagine being trapped aboard the doomed Titanic on an icy Atlantic . . . with the walking dead. This fast-paced thriller re-imagines the historical events of the fateful Titanic voyage through the lens of zombie mayhem. Captain Edward Smith and his inner circle desperately try to contain a weaponized zombie virus smuggled on board with the 2,200 passengers sailing to New York. Faced with an exploding population of lumbering, flesh-hungry undead, Smith’s team is forced into bloody hand-to-hand combat down the narrow halls of the huge steamer.

In its few short days at sea, the majestic Titanic turns into a Victorian bloodbath, steaming at top speed toward a cold, blue iceberg.

It is often said to not judge a book by the cover, but this cover is so creative and reflects how inventive the book is. So, yes this book can be judged by it’s cover.

Everyone is familiar with the story of the Titanic, and I think that is what makes this book so appealing. It is easy to lose yourself in this narrative because you can visualize the story because you know the setting so well.

The famous characters we know and love from the stories of the Titanic are alive in the story, as well as some new additions that fit in quite nicely. It is easy to imagine these characters wandering the halls of the famous ship fighting the plague. The atmosphere is created perfectly. The reader can vividly see the beloved Titanic, but with a dark twist. I loved all the extra little details the authors included to make the story seem more ‘real’.

Great characters, very imaginative premise and overall, wonderful book. A must read for Zombie fans, and any historical buffs.

It is good for a light read and a few laughs.

While the ending was complete, there is still enough opening to revisit yet another historical event where perhaps the same plague can reappear, reshaping our history and extending our imagination once again.