Inside HBO’s Game of Thrones: Season 1 & 2 by Bryan Cogman 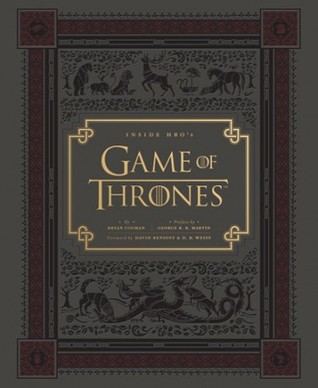 This official companion book gives fans new ways to enter this fictional world and discover more about the beloved (and reviled) characters and the electrifying plotlines. Hundreds of set photos, production and costume designs, storyboards, and insider stories reveal how the show’s creators translated George R. R. Martin’s best-selling fantasy series into the world of Westeros. Featuring interviews with key actors and crew members that capture the best scripted and unscripted moments from the first two seasons, as well as a preface by George R. R. Martin, this special volume, bound in a lavishly debossed padded cover, offers exclusive access to this unprecedented television series. 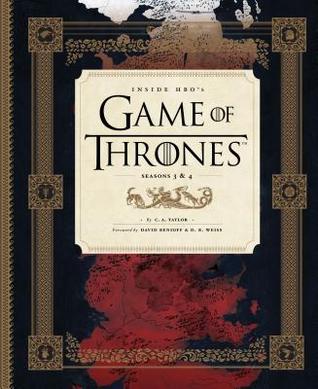 Each episode of HBO’s Game of Thrones draws millions of obsessed viewers who revel in the shocking plot twists, award-winning performances, and gorgeously rendered fantasy world. This official companion book reveals what it takes to translate George R. R. Martin’s bestselling series into a wildly popular television series. With unprecedented scope and depth, it showcases hundreds of unpublished set photos, visual effects art, and production and costume designs, plus insights from key actors and crew members that capture the best scripted and unscripted moments from Seasons 3 and 4.

Required reading for the die-hard fan, and the perfect way to catch up on the series before the much-anticipated Season 5 debuts, this special volume offers an exclusive window into cable’s highest-rated show.

Have a Game of Thrones fan on your Christmas list? Well, lucky for you, err should I say lucky them? These two books are essentials for fans of the television show. These books are simply lush. Everything you want to know about the world of Westeros and the characters you love, or love to hate.

Give the gift of reading!

A Canadian gal that firmly believes words can change the world. An avid reader, writer and Autumn/Winter lover. She excels at communications and writes for pleasure and profession.
View all posts by Lisa Lunney →
This entry was posted in Book Reviews, Author Interviews & More!, Halloween and tagged Best Books of 2014, Bookworm Gifts, Game of Thrones, Game of Thrones Fans, Game of Thrones Gift Books, Gifts From Westeros, GoT Fandom, GoT Inspired Gifts, Westeros, Westeros Gifts. Bookmark the permalink.