The first Valentine’s cards were sent in the 18th century. Initially these were handmade efforts, as pre-made cards were not yet available. 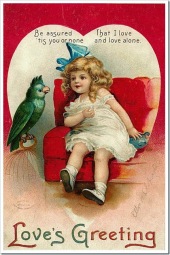 Lovers would decorate paper with romantic symbols including flowers and love knots, often including puzzles and lines of poetry. Those who were less inspired could buy volumes that offered guidance on selecting the appropriate words and images to woo their lover. These cards were then slipped secretly under a door, or tied to a door-knocker.

It was in Georgian Britain that pre-printed cards first began to appear, though these were not yet as popular as they were eventually to become. Perhaps the oldest surviving example dates from 1797: this card, held at York Castle Museum, was sent by one Catherine Mossday to a Mr Brown of London. It is decorated with flowers and images of Cupid, with a verse printed around the border reading:

Since on this ever Happy day,
All Nature’s full of Love and Play
Yet harmless still if my design,
‘Tis but to be your Valentine.

Victorian Valentines
The industrialisation of Britain in the early 19th-century brought with it rapid advances in printing and manufacturing technologies. It became easier than ever to mass-produce Valentine’s cards, which soon became immensely popular.

It is estimated that by the mid 1820s, some 200,000 Valentines were circulated in London alone. 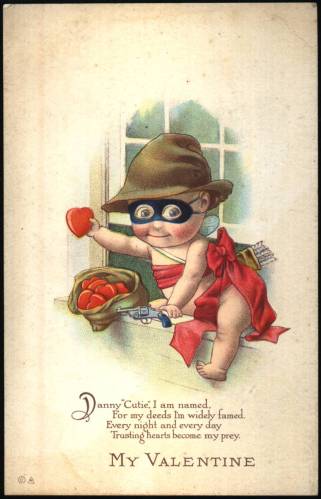 The introduction of the Uniform Penny Post [a component of the comprehensive reform of the Royal Mail, the UK’s official postal service, that took place in the 19th century] in 1840 bolstered the popularity of Valentine’s cards yet further: reports suggest that by the late 1840s the amount of cards being circulated doubled, doubling once again in the next two decades. 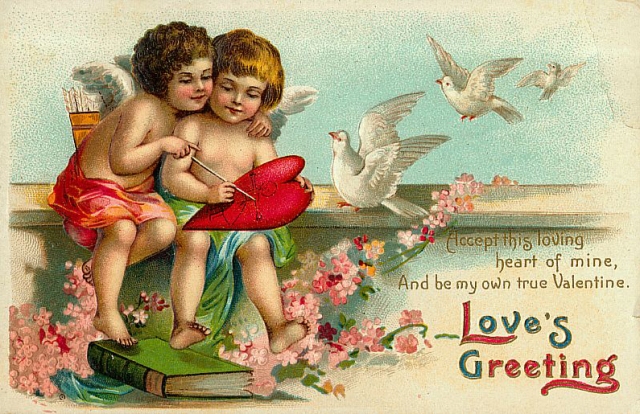 Many Victorian Valentine’s cards survive, but most intriguing is a collection of more than 1,700 examples that is held at the Museum of London. This is the archive of the stationer Jonathan King, who ran a card-making enterprise in London. This collection, which has been digitised, demonstrates the huge array of designs, verses and sentiments that were popular with lovers in Victorian Britain. Cards tended to feature elaborate paper lacework, embossing and other intricate designs.

The more expensive the card, the more elaborate the design would be. This meant it would be obvious how much your lover had spent on a card! Typical imagery included flowers, love knots and Cupid. Though hearts were sometimes used, Victorian cards did not feature the ubiquitous red hearts that are so typical of Valentine’s cards today.