Almanac: Legend of the Oak King

The legend of the Oak King hits me right in the feels with every read.

In many Celtic-based traditions of neopaganism, there is the enduring legend of the battle between the Oak King and the Holly King. These two mighty rulers fight for supremacy as the Wheel of the Year turns each season. At the Winter Solstice, or Yule, the Oak King conquers the Holly King, and then reigns until Midsummer, or Litha. Once the Summer Solstice arrives, the Holly King returns to do battle with the old king, and defeats him.

In the legends of some belief systems, the dates of these events are shifted; the battle takes place at the Equinoxes, so that the Oak King is at his strongest during Midsummer, or Litha, and the Holly King is dominant during Yule. From a folkloric and agricultural standpoint, this interpretation seems to make more sense.

The Oak King and The Holly King

In some Wiccan traditions, the Oak King and the Holly King are seen as dual aspects of the Horned God. Each of these twin aspects rules for half the year, battles for the favor of the Goddess, and then retires to nurse his wounds for the next six months, until it is time for him to reign once more.

Franco over at WitchVox says that the Oak and Holly Kings represent the light and the darkness throughout the year. At the winter solstice we mark “the rebirth of the Sun or the Oak King. On this day the light is reborn and we celebrate the renewal of the light of the year. Oops!

Are we not forgetting someone? Why do we deck the halls with boughs of Holly? This day is the Holly King’s day – the Dark Lord reigns. He is the god of transformation and one who brings us to birth new ways. Why do you think we make “New Year’s Resolutions”? We want to shed our old ways and give way to the new!”

Often, these two entities are portrayed in familiar ways – the Holly King frequently appears as a woodsy version of Santa Claus. He dresses in red, wears a sprig of holly in his tangled hair, and is sometimes depicted driving a team of eight stags. The Oak King is portrayed as a fertility god, and occasionally appears as the Green Man or other lord of the forest. 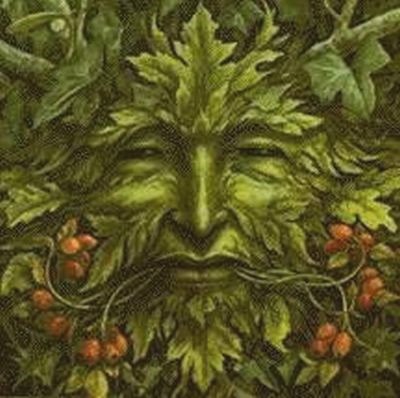 The symbolism of the holly and the ivy is something that has appeared for centuries; in particular, their roles as representations of opposite seasons has been recognized for a long time. In Green Groweth the Holly, King Henry VIII of England wrote:

Of course, The Holly and the Ivy is one of the best known Christmas carols, which states, “The holly and the ivy, when they are both full grown, of all the trees that are in the wood, the holly bears the crown.”

The Battle of Two Kings in Myth and Folklore

Both Robert Graves and Sir James George Frazer wrote about this battle.

Graves said in his work The White Goddess that the conflict between the Oak and Holly Kings echoes that of a number of other archetypical pairings. For instance, the fights between Sir Gawain and the Green Knight, and between Lugh and Balor in Celtic legend, are similar in type, in which one figure must die for the other to triumph.

Frazer wrote, in The Golden Bough, of the killing of the King of the Wood, or the tree spirit. He says, “His life must therefore have been held very precious by his worshippers, and was probably hedged in by a system of elaborate precautions or taboos like those by which, in so many places, the life of the man-god has been guarded against the malignant influence of demons and sorcerers. But we have seen that the very value attached to the life of the man-god necessitates his violent death as the only means of preserving it from the inevitable decay of age.

The same reasoning would apply to the King of the Wood; he, too, had to be killed in order that the divine spirit, incarnate in him, might be transferred in its integrity to his successor. The rule that he held office till a stronger should slay him might be supposed to secure both the preservation of his divine life in full vigour and its transference to a suitable successor as soon as that vigour began to be impaired. For so long as he could maintain his position by the strong hand, it might be inferred that his natural force was not abated; whereas his defeat and death at the hands of another proved that his strength was beginning to fail and that it was time his divine life should be lodged in a less dilapidated tabernacle.”

Ultimately, while these two beings do battle all year long, they are two essential parts of a whole. Despite being enemies, without one, the other would no longer exist.

A Canadian gal that firmly believes words can change the world. An avid reader, writer and Halloween enthusiast. She has a special interest in communications and writes for pleasure and profession. She moonlights as a metaphysical maven with a knack for creating magical crystal jewelry and holiday accessories.
View all posts by Maison Moonchild →
This entry was posted in Holiday Season, Lifestyle/Recipes and tagged Holly King, legends, litha, lore, midsummer, myths, Oak King, seasonal legends, Solstice, summer myth, summer solstice, turning of the wheel, wheel of the year, winter myth. Bookmark the permalink.