Book Review: The End of the Day by Claire North

Book Review: The End of the Day by Claire North 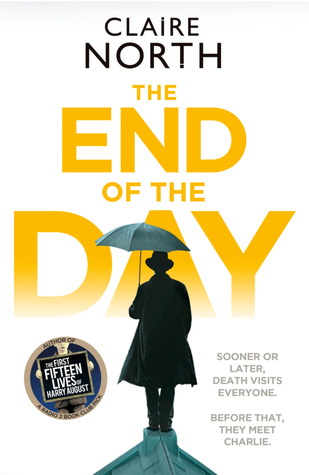 Charlie has a new job. He gets to travel, and he meets interesting people, some of whom are actually pleased to see him.

It’s good to have a friendly face, you see. At the end.

But the end of all things is coming. Charlie’s boss and his three associates are riding out, and it’s Charlie’s job to go before.

Sometimes he is sent as a courtesy, sometimes as a warning. He never knows which.

The End of the Day, takes place in the real world, but with one fantastical element added: the presence of the Four Horsemen of the Apocalypse, and their Harbingers. Death has an office in Milton Keynes from which he hires Charlie to be his Harbinger of Death. The reader embarks on a journey examining what it means to be human.

Charlie’s job is to travel the world, to talk to those chosen by Death, to bring them a gift, and to honour life. There is an episodic air to events as the reader follows Charlie going about his business. To an outsider the meetings may appear to be nonsensical, but they perfectly illustrate how intimate and personal a life and a death are.

The Harbinger of Death isn’t the job he ever expected to be doing, but finds it suiting. He gets to travel, meet interesting people and celebrate the complexity of human life. To be clear, he isn’t death. Charlie is what comes before; he is a courtesy or a warning. The other important distinction that needs to be highlighted is that death doesn’t have to mean the end of a life; it can also mean the end of an idea.

Modern helpers for the three horsemen make appearances throughout the story. The Harbinger of Famine frequents a supplement shop always in awe.  Pestilence’s visit to an immunization clinic brings a comedic light to an otherwise dark story. The characters are so cleverly constructed that they spring to life from the pages.  A story that dives into the human condition and keeps digging along this single path, always vacillating between joy and despair, purpose and meaninglessness.

Despite all the death and misery, despite the failed battles and broken people, at its core, this story is about seeing the humanity in each of us, even in those of us who do not see the humanity in others. Charlie is the mirror that allows us to view our own humanity in all its chaotic glory.

A Canadian gal that firmly believes words can change the world. An avid reader, writer and Halloween enthusiast. She has a special interest in communications and writes for pleasure and profession. She moonlights as a metaphysical maven with a knack for creating magical crystal jewelry and holiday accessories.
View all posts by Maison Moonchild →
This entry was posted in Book Reviews, Author Interviews & More! and tagged amreading, Apocalyptic Books, Book Review, claire north, for stephen king fans, Must Reads, spring reads, spring reads 2019, the end of the day book review, the end of the day by claire north. Bookmark the permalink.